Badr Shakir al-Sayyab (1926-1964) was an extremely influential Iraqi poet and a pioneer in free-verse poetry. After studying in Baghdad, he worked as a teacher, then joined the Iraqi Communist Party. Sayyab spent nine years with the party before becoming disenchanted with its ideology and leaving, but he still faced persecution by the government for his previous involvement with the party. Sayyab fled to Kuwait in 1953 and spent a year in exile there before returning to Iraq and denouncing the Communist Party. During his time in exile, he wrote the acclaimed poem “Rain Song (انشودة المطر)” in which he mourns the injustice, tragedy, and destruction he witnessed in his beloved Iraq.

Sayyab utilizes imagery and symbolism of rain to simultaneously convey sorrow and hope. Rain is no longer simple precipitation, but a lamentation, a source of loneliness, and a giver of life. Sayyab initially compares rain to the tears of a child who has lost his mother:

Evening yawned, from low clouds
Heavy tears are streaming still.
It as if a child before sleep were rambling on
About his mother a year ago he went to wake her, did not find her (ll. 22-25)

He then contemplates the isolation and sadness felt on rainy days, simultaneously sneaking in a parallel between rain and blood:

Finally, toward the end of the poem, Sayyab takes a more optimistic stance and focuses on the life-giving properties of rain:

In every drop of rain
A red or yellow color buds from the seeds of flowers
Every tear wept by the hungry and naked people
And every spilt drop of slaves’ blood
Is a smile aimed at a new dawn. (ll. 110-113) 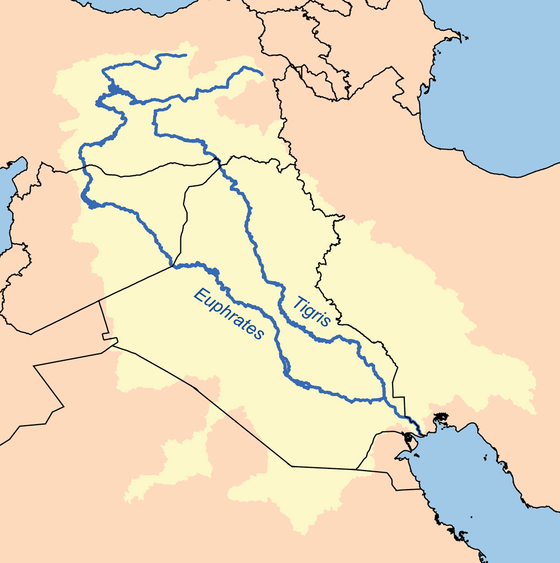 The Tigris and Euphrates rivers in Iraq

Water holds a geographical significance for many Arab countries (including Iraq, which contains the Tigris and Euphrates Rivers), as it allowed these countries to develop and grow. A common motif across Arabic writing is the association of water and rain with fertility, life, and growth and dryness and sand with stagnation, destruction, and death.

Sayyab’s multifaceted symbolism of rain contrasts with this typical Arabic literary take. Rain is significant to Sayyab because it has been a constant throughout Iraq’s history, both good and bad; he constantly repeats “Drip drop the rain / Drip drop the rain” throughout the poem. Whether remembering Iraq’s tragic past or conceiving of a more hopeful future, Sayyab cannot imagine Iraq without the rain.

Rain is also a popular symbol among Western writers, artists, and musicians. Westerners do not have a very strong geographical link with water or rain: they may live near a coast or a river, but few Americans and Europeans view this water as particularly life giving. Therefore, rain symbolism in western art tends to take on a more negative tone, encapsulating on the sad, lonely, or destructive features of rain. Below are three examples of songs by modern Western artists which utilize rain imagery and symbolism:

“Paranoid Android” encapsulates the loneliness, paranoia, and isolation felt by individuals navigating society. Its narrator is an android who criticizes humans enjoying their lives as mindless, dull, and shallow. During the final part of the song, the android feels so disconnected from society that it calls the rain to “Rain down, rain down / Come on, rain down on me / From a great height.” This image accentuates the android’s loneliness and isolation, while its call for rain entails a request to be killed, as rain can literally rust and destroy the android. The usage of rain in “Paranoid Android” as a symbol of societal isolation and destruction directly contrasts Sayyab’s vision of it as an essential part of his image of Iraq.

“Ocean Rain” compares a difficult relationship to the arduous and dangerous task of sailing through a hurricane. The narrator professes “I’m at sea again / and now your hurricanes have brought down this ocean rain” to a person who acts as a destructive force in his life. This association of rain with a violent storm and a toxic relationship is exactly the opposite of the traditional Arabic view of rain as a life-bringer which can be found in the last stanzas of Sayyab’s “Rain Song.” 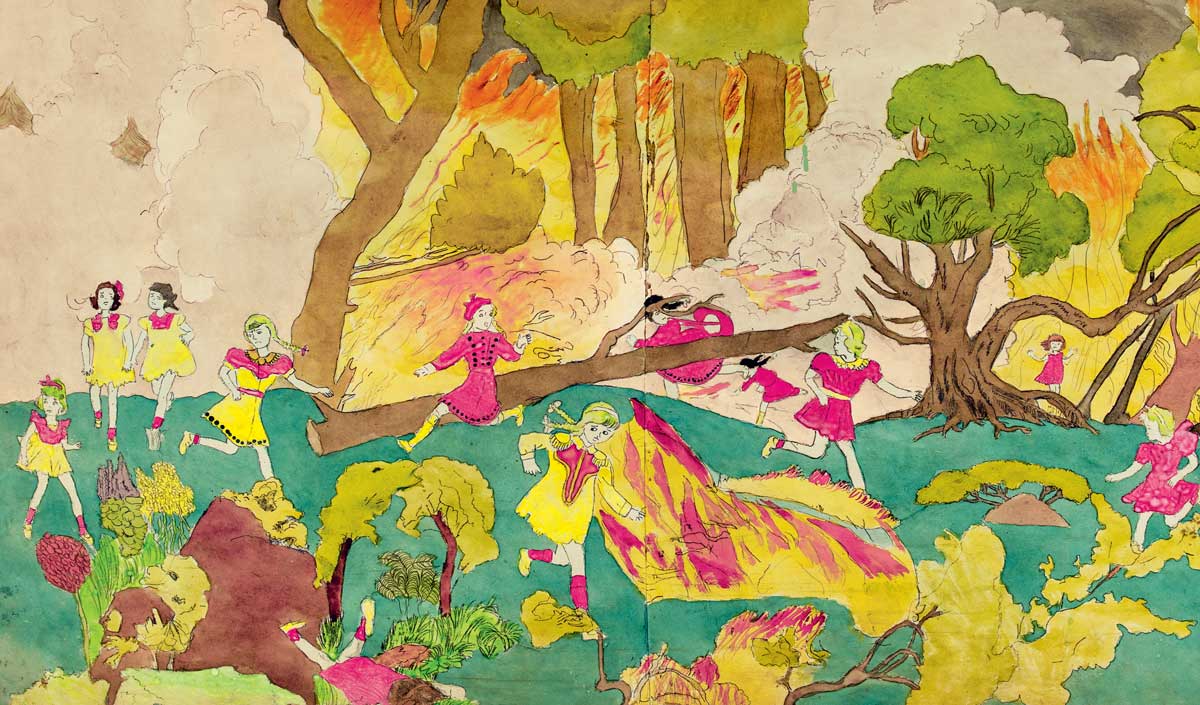 One of Darger’s illustrations of the Vivian Girls

Finally, “April 8th” is a song about reclusive writer and artist Henry Darger (1892-1973). During his life, Darger had few friends, worked a variety of menial jobs, and was unable to adopt a child; however, after his death, a massive amount of artwork, journals, and books were discovered in his apartment. This included The Story of the Vivian Girls, a single-spaced 15,000 page novel for which Darger received much posthumous acclaim.

The lyrics of “April 8th” paint the picture of a childless man sitting alone in his apartment while the rain falls outside his window. The rain adds an air of loneliness and melancholy aligning with external perceptions of Darger as a strange, friendless, sad man. However, the song’s final lines of  “I am safe on the inside / blankets wrapped and drifting off to sleep” show that Darger is not troubled by the rain or his societal isolation: staying inside allows him to cozily wrap himself in blankets and indulge in creative endeavors. This depiction of rain is slightly more optimistic than those in “Paranoid Android” and “Ocean Rain,” but it still lacks the unifying or life-giving properties attributed to it by Sayyab and other Arab writers.