After a wonderful morning exploring the temples of Selinunte, the gang was hungry for some grub. We converged on a beachside pizzeria, but things went sideways from there. There was wonderful conversation had between the Elder Council of Latin students and Professor Boyd, but as the the two o’clock hour passed, our food was nowhere to be found. The waiter insisted over and over that our food was about to come. Eventually our fearless leaders said enough was enough, and we stormed off onto the bus and towards Porto Empedocle. Hey guys! Hope you had an excellent time at Segesta and everywhere else; have you tried some granita yet? or some arancini?(they’re fried risotto balls, for those of you who have never heard of em). Speaking of Segesta, here’s a pic of the Segestan temple that I took last fall: Segesta, as you guys probably have all heard, is an interesting site.  The Segestans who constructed this temple seem to have admired a lot of architectural similarity to sites on mainland Italy, such as Paestum.  There also  has been a lot of ink spilled as to what their relationship might have been with the invading Greeks. The majority of scholars, however, seem to agree that there was a fairly stable alliance. The main temple itself at Segesta also has the same architectural elements as most ____ temples, such as undecorated capitals. Thus, what kind of temple is this? That’s right! Doric, nice job!  However, as you might remember from mine and Julianna’s presentation, this temple is a little weird. It’s unfinished because you can’t see the fluting on the columns, as I think Gib noted during our presentation. The reason for its being unfinished is a tad mysterious, but it’s likely that the temple merely “served as a Hellenizing decorative element”, situated around an “open air altar” (Burford 87). Another mysterious artifact in southern Italy, another day out of the trip. Perhaps next post, I’ll talk about something with more concrete conclusions, but I haven’t made up my mind yet. See you for the next post! 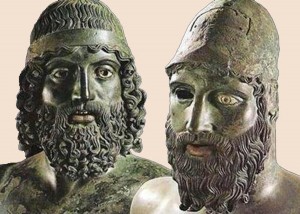 The Famous Riace Bronzes (My pic exhibits Statue A at the left from the Museo Archaeologico Nazionale Reggio Calabria, and a general pic exhibiting both statues (A, then B) is to the right).

Ciao again, ragazzi. Just posting twice today since I didn’t post yesterday (it’s once per day on the trip, right?). I thought I might change it up a little since I didn’t have anything more to say about Palermo, and show you one of my fave artifacts that we saw on our trip when my abroad program went south from Rome to Reggio Calabria before we made the ferry trip across to Sicily this past October. We saw both statues exhibited at the archaeological museum there, along with other ancient Greek and Roman artifacts dredged from the sea.  These guys are known as the fabled Riace Bronzes, and have a curious history. Two things that many scholars agree on is that 1), the wonderful workmanship of both of these bronze sculptures is evident and 2) these sculptures were discovered off the coast of Riace, Italy, which is where their name comes from. The rest, however, is famously controversial. The statues themselves are referred to as Statue A and Statue B, as their real names have’t been conclusively agreed upon. Some scholars do think they might represent works from a bigger collection, and these statues may potentially represent characters from the play Seven Against Thebes, However, these dates are also not a sure bet: some scholars also tend to think that they could be replications and thus newer, perhaps dated to some time after 100 BC. The scholars who argue for the 5th century BC date are convinced that the sculptures exhibit key features of the Early Classical sculptural methods. A scholar named Caroline Houser  also notes that “repairs to Statue B in antiquity” probably “indicate that the sculpture was not new when it was lost at sea” (Houser 5) and argues that the transport of the statues was likely part of the trend of Romans taking Greek statues from sculptures as loot back to Italy. Unfortunately, the boat has never been found, and we may never truly know where it was headed with these statues, or conclusively know much more than we do now about Statues A and B. However, they’ll always hold a place in our hearts (sorry to get soppy, but they are freakin’ amazing statues).

Hey guys! Hope you’re having an awesome time, eating lots of gelato, and hopefully got some great cannoli too. Just thought I’d kick off my posts, and motivate you guys to post your pics too, although I know you’re pretty busy. My group this past fall actually went to Palermo last, but I thought I might coordinate my photos as best I can with your itinerary. This is one of my pics from when we were there in October. The Monreale Cathedral  is one of the most gorgeous places in Palermo in my opinion, and from a classicist’s view, also pretty cool since there’s Latin that you can read in the mosaics! (ok sort of, it’s from the medieval period so it’s harder to read and doesn’t make as much sense sometimes). It was built in the middle of the 1100’s by the Normans for their king, William the 2nd who was in charge of Sicily at that time.The mosaics themselves are clearly stunning. Interestingly enough, they were actually constructed on boards and then placed in their positions as you saw today in the cathedral, instead of being constructed piece by piece in the cathedral as a lot of mosaics were built. From an art history perspective, people and animals also demonstrate the characteristic “flatness” seen in other portraits during this time period (Decoration 1). In the cathedral itself, the scenes depicted are mostly biblical scenes from the Old and New Testament. Once you advance into the cloister though, things start to change. If you look carefully on the carved capitals of the columns (NOT Doric, but columns nonetheless!), you can see that some of them exhibit knights fighting. There’s a debate continuing between art historians as to whether these scenes depict the conflict between “vice and virtue” or the actual Crusades; personally, though, I might be more inclined to agree with art historian Lorna Walker, who suggests the knights may have merely been added from a “pattern book” of sorts in order to fill the empty stone space on the columns (Fighting 47). < Cloister Courtyard of Monreale. Look closely, and you can see the carvings on the columns above.