The Chinese Qipao as the standard wear for chinese women in the early 17th century was a more conservative dress than the Qipao after it’s resurfacing in the early 1990’s. The original Qipao sported a wide, baggy, and loose fit which ended up covering most of the female body. It’s baggy feature cocealed the figure of the wearer regardless of size and age. The Qipao was worn by women for everyday occasions, however after 1644, the Qipao was no longer required to be worn by all. But, in the 300 years following, the Qipao was ultimately adopted and tailored to suit the entire population. The photo on the left displays a Qipao from the 1930s. This Qipao is fashioned like the original Qipao was. As you can see the sleeves are long and baggy. The dress itself is also long and baggy going down to just above the ankle. The high neck piece conceals the women’s neck. The old-fashioned Qipao was a lot less constricting then previous garbs, which is the reasoning behind the baggy look. The embroidery on the Qipao is also well illustrated. It’s detailed in flowers and other greenery all over the Qipao. This well detailed embroidery is what catches the eye first. 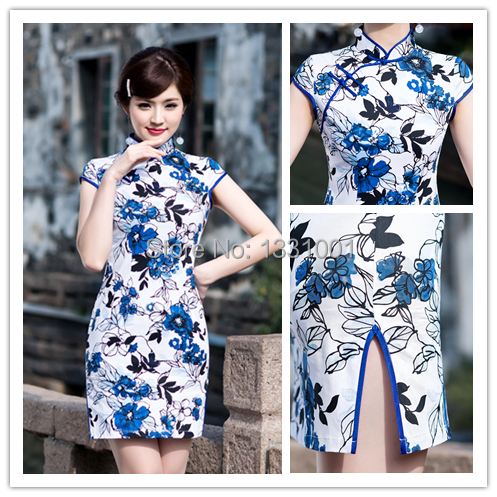 The photo below displays a modern Qipao dress. This Qipao is form fitting, highlighting the woman’s physique. The neck piece is not as high as the original and reveals the woman’s upper neck. The Qipao’s length has been cut to show the lower half of the woman’s thigh. A slit was also added on the sides of the dress showing only a slight part of her upper thigh. The sleeves are cut short, showing most of the woman’s arm. Although the design on the modern Qipao is beautiful, it is not the main focus of the dress like the embroidery of the traditional Qipao was. Overall, the modern Qipao is centered around the woman’s slender physique, bringing forward her sexuality.

nice, but explain what are the social, cultural, historical, or gender connotations that the transition of qipao style suggests?