An Educator and Organizer’s Role in Empowering Future Leaders

While educators and organizers can take on different roles, their main function is to do their part in helping the individuals in their communities. Educators and organizers can be categorized as leaders in their communities where the people are the members. Ella Baker, Saul Alinksy, Myles Horton, and Paulo Freire all seem to be in agreement that the members come first when teaching in and running an organization. For them, the success of educators and organizers lies in distributing power to the members of their organization, helping their members to have a self-realization of the potential and power they already hold, and cultivating self-respect so that the people may take direct action in their lives.

Not only must educators and organizers distribute leadership and power from the leader to the people, but they also need to allow their members to become aware of the promise and power they already possess. Baker described how “in organizing a community, you start with people where they are” (as cited in Mueller, 2004, p. 84). She worked with the collective power that was already there to create a stable foundation for the groups that she was involved with. Not only did she see potential in those around her, but she helped them to be able to see it in themselves. When the people realize the power they hold, they can then move forward the mission of the organization without the organizer or teacher needing to do so directly. 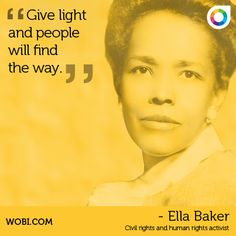 After leaders successfully empower their group members, they are able to take direct action in their lives. For Ella Baker, by “empowering people through their direct participation in social change,” she spread power by encouraging the people around her to identify what matters to them and act on it (Mueller, 2004, p. 83). Direct action also allows “people [to] have a right to participate in the decisions that affect their lives” (as cited in Mueller, 2004, p. 84). The decisions being made about the lives of the people should come from them as they are the ones who know their situations the best. After the people realize their power and capabilities, they find their voices in order to advocate for themselves and their beliefs about their changing world.

For educators and organizers, their purpose is not to create change as a single leader but as an equal member of a larger group. A leader’s success is not derived from what they do as an individual. It comes from giving a voice to those who may not have been heard otherwise. It comes from helping people to respect themselves because self-respect is the root of confidence and courage and it takes both of these qualities to make a change. Effective educators and organizers realize that the success of their classroom or movement depends on their relationship with the people around them and in doing their best to help them realize who they are, what they stand for, and the potential they have to create change.